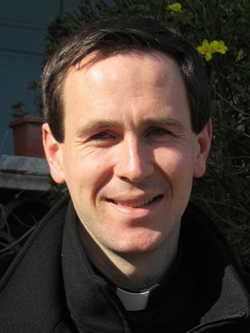 Fr. Sean Davidson is a priest of the diocese of Fréjus-Toulon in France. He was born in London in 1979, and spent much of his youth in Ireland where he eventually received his priestly calling. Regularly frequenting the holy shrine of Our Lady of Knock, as well as his local perpetual Eucharistic Adoration chapel, were central to the discovery of his vocation. The path of his priestly journey has continued to be marked by a focus on love for the Holy Eucharist and the spirituality of consecration to the Blessed Virgin Mary.

In 2009, he was involved in the foundation of an association in France called the Missionaries of the Most Holy Eucharist, devoted to preaching on the Real Presence of Christ in the Blessed Sacrament. This afforded him the possibility of travelling as a Eucharistic missionary throughout Europe, America, and as far as Asia. After being ordained to the sacred priesthood in France on June 26th 2011, the solemnity of Corpus Christi, he celebrated his first Mass on the memorial of Our Lady of Perpetual Help. He began his priestly ministry in the parish of Sanary-sur-mer and then worked in the ancient shrine and basilica of Saint Mary Magdalene in south east France. The organisation of Eucharistic Congresses, parish missions, as well as spreading Eucharistic love through radio, television, and the internet formed part of his mission during this period.

In December 2014, Fr. Sean was given responsibility for the establishment and direction of a Eucharistic retreat centre in the Seminary of the Immaculate Conception, Long Island, New York. His ministry there consisted mainly in providing various forms of retreats, including the Ignatian spiritual exercises, as well as offering spiritual direction. He was privileged to be able to lead ordination retreats for seminarians and deacons studying in the north east of the United States, as well as for members of different religious congregations. He has done a small amount of writing in recent years, and most recently edited the book entitled, The Bishop of the Abandoned Tabernacle by Victoria Schneider.

In 2018, Fr. Sean returned to England to be with his father who was terminally ill. He helped out in parishes in London for some time and then went on to spend a year in the parish of Our Lady of Reparation in West Croydon. During this time, he was also able to work with Mother Teresa's Missionaries of Charity, supporting them in their beautiful work of love for Christ's poor. In February 2020, he moved to the Shrewsbury diocese to be part of Bishop Mark Davies' mission of Eucharistic renewal in the Church. He is currently serving as parochial administrator of the parish of St. Chad in Cheadle village, and as of September 19th 2020, also took on the administration of the parish of St Ann in Cheadle Hulme.

LOCAL PASTORAL AREA  St Ann's is one of the three churches making up the Shrewsbury Diocese's Local Pastoral Area 19 - dedicated to St Chad, a 7th century bishop thought to have had links with this area (Cheadle = Chad Hill?) The other two parishes of the LPA are http://www.christchurchhg.co.uk/ Heald Green, and http://stchadscheadle.com/, Cheadle.

ECUMENISM St Ann’s parish is an active member of Churches Together in Cheadle Hulme (CTCH), which includes all the Christian churches of the area and strives to foster Christian Unity in prayer, service and fellowship through various joint events and regular meetings. The ministers of the churches also meet monthly for prayer, discussion and mutual support.